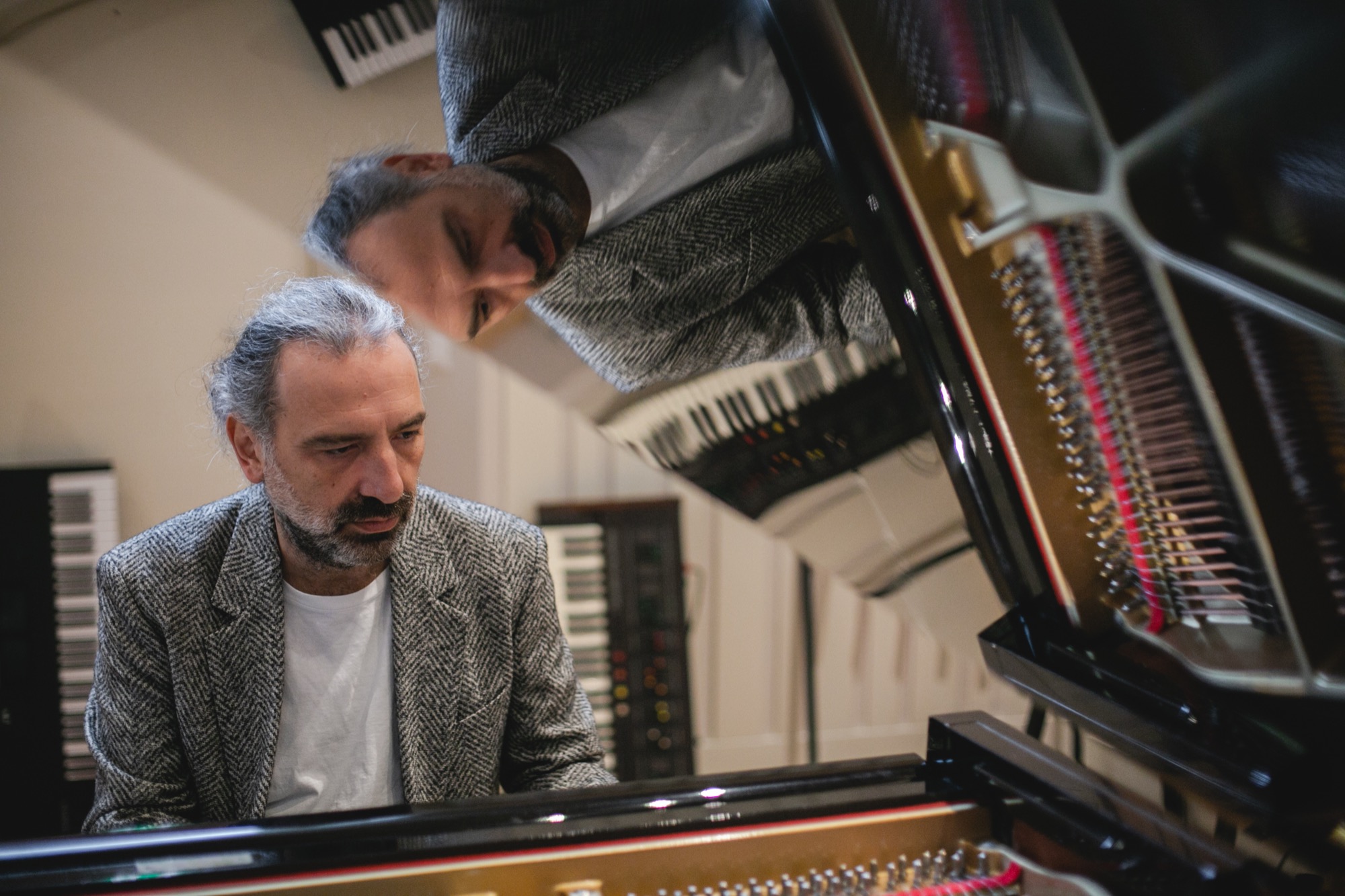 United Kingdom, at the dawn of the 70s.

Andrew Lloyd Webber and Tim Rice decide to write an opera, more specifically a rock opera on the Passion of Jesus.

After a few meetings with possible sponsors, they realize it would be too complicated to take their project on stage. They therefore decide to make a record. First a single, Superstar, then an entire album, released in September 1970.

The score – that will later become a play staged on Broadway and in London, then in 1973 a masterpiece of cinema directed by Norman Jewison – is full of ideas, brainwaves and suggestions, written with the open hearts and beating minds of two English guys in their early twenties. One of them, Lloyd Webber, was born into a family of classical musicians, his father a composer and organist and his brother a cellist; the other one, Rice, was pursuing a career as pop singer. At the time of the Beatles, in England everything seems possible, therefore everything IS possible, to the point that Judas Iscariot can sing the doubts of all of us, accompanied by a choir of soul girls.

The Lloyd Webber-Rice duo has previous experience in musical theatre; they stood out in a performance for children, Joseph and the Amazing Technicolor Dreamcoat, based on the biblical story of Joseph, one of Jacob’s sons. After the very flourishing success of their single Superstar in the US market, they work hard to write an entire opera. Together they imagine the narrative structure and the topics they want to address in their songs. They broadly outline the emotions behind each song, then Lloyd Webber translates such emotions into music and Tim Rice adds the lyrics. They complete the score in just a few weeks and take it to the studio. For the recording session of Jesus Christ Superstar, they are not afraid to go all out. The symphonic orchestra is accompanied by a rock band. The cast of singers is diverse and full of talents, from debutant Yvonne Elliman (Mary Magdalene), discovered by Lloyd Webber in a piano bar, to the very famous Ian Gillan (Jesus), Deep Purple’s lead singer. And if you need strong contemporary colors to make this two-thousand-year-old story appealing, you better rely on very energetic musicians. The bassist, the drummer and the two guitar players are from The Grease Band who accompanied Joe Cocker in his concerts. The four musicians’ long rehearsals, together with the composer, crystalize the score as we know it today; the same score Lloyd Webber wants to be faithfully performed, note by note, today as in the past.

Is there a desire to shock and scandalize in Jesus Christ Superstar? Back in those days, shocking and scandalizing was the norm, and these two verbs were buzzwords in the artistic debate. Surprisingly, the most astonishing part of this rock opera is its momentum towards the myth, its desire to use many colors to depict a fundamental story of our culture and the way we see things.

If, as Joseph Campbell said, “Myth opens the world to the dimension of mystery”, that of Jesus is the myth par excellence. It brings us face-to-face with a number of mysteries, first and foremost the mystery of death. And it puts us in the corner when facing key issues: what to do with our lives? What vocation should we follow? What are we willing to give away to others? A thousand topics enhanced by music which makes them alive and throbbing.

Musical themes continuously chase one another across the tracks of the record. You couldn’t imagine anything more diverse. From songs based on unusual time signatures for rock music (Everything’s Alrightin 5/4, The Templein 7/4), to suggestions coming from authors of the early 20thcentury (in the overture of the album, there is a quite obvious quotation from the ballet The Firebirdby Igor Stravinsky), to flat and simple melodies, so simple and pure that they reject any opposing argument and end up in the songbook of the Italian Church. The Last Supper – a tune sung by the apostles in a quiet tone during the Last Supper – takes new shape in the 80s through a prayer attributed to Saint Francis and becomes “Where there is hatred, let me sow love”; people sang it in choir during mass, accompanied by a guitar. Probably, many priests did not know the profane origin of this melody, or they definitely would have taken action.

What happens to Jesus could happen to anyone: Jesus takes up the world’s burden and is overwhelmed by it. It is easy, from our side, to feel empathy. And it is even easier to feel empathy for Judas, as Lloyd Webber and Rice realize when conceiving the framework of the album. As such, in Jesus Christ Superstarwe see that Judas’ feelings for Jesus change in many different ways: from love to treason, to penance and the consequent self-inflicted punishment. The same musical figure that accompanies him at the beginning of the album will later be the background for his suicide. It is a six-note ostinato that revolves around itself, just like Judas’ mind. Such a masterpiece is made of three Ds, an E-flat and a C that ends up in D, taking you back to the start, to repeat. If you are an apostle, your song will rightly revolve around D (Divinity). Sure! That’s because Lloyd Webber, born in London, naturally uses English names for notes. Yet, for my Italian readers, such D – that is the core of Judas’ song – becomes a “re”, which is a note but also means king (King of the Jews). Now, let’s move on.

In this opera even Pontius Pilate, a character made rather one-dimensional by catechism, appears in his image of mythical figure. He is a man full of doubts, who feels his power is at risk as he is surrounded by the class of the High Priests who want to find an exemplary punishment for that puppet who pretends to be the Messiah. A Messiah who clearly wouldn’t harm a fly and could be set free. Especially after Pilate had a prophetic dream in which he saw that in the future the world would blame him for the death of that innocent. But let’s be clear: in the biblical stories, the wifeof Roman prefect Pontius Pilate is actually the one who had that dream, while he was peacefully sleeping. This is just one example of the authors’ artistic license regarding the story. Other things come from the Apocryphal Gospels, as stated by the authors themselves. However, as we know, the Gospels that tell the life of Jesus present many differences, most of which are remarkable. Jesus’ character changes a lot from Gospel to Gospel. Oftentimes his story is clearly shaped on that of Mitra, his direct inspirer, while other times it differs from it. The reason why Lloyd Webber and Rice are so interested in the story of the Passion of Jesus is its nature as a resounding catalyst of universal and eternal themes, such as love, friendship, destiny, earthly justice and its clear limits, to omit everything following Christ’s death. Wilhelm Reich wrote a book on this to remind us that we continuously kill the Christ inside of us through our actions, and we insist in creating complex sophisms in our mind to justify ourselves. If only we were able to keep a warm heart and an open mind, we could constantly be driven by Love and Ecstasy.

Back in those days there were many controversies. In this rock story, Jesus dies on the cross. End of the album. And what about resurrection? Nobody talks about it. And what about his divine origin that gave him supernatural powers? Nothing, no trace of miracles. Herod is the only one who mentions Jesus’ special abilities rather sarcastically in his song (“Prove to me that you’re no fool / Walk across my swimming pool”, just to mention one). He does so with a musical smirk, immersed in a sound landscape typical of the early 20thcentury in the US, completely detached from the rock opera context in which it is placed. King Herod’s Song is indeed the only song of Jesus Christ Superstarthat existed before the opera was even conceived. It was recorded with different lyrics and title (Try It and See) by – guess who? – Rita Pavone. You see? Lloyd Webber and Rice’s masterpiece provides so many clues that it is possible to mention Rita Pavone and Jesus in the same paragraph. But let’s go back to the hero of the opera. No miracles, no resurrection and this is what is left: in this story of the Passion, Jesus is a man.

“Heal yourselves”, cries Ian Gillan-Jesus in the record when surrounded by lepers who want to be touched and healed.

This sounds like the exasperated cry of a man who feels overwhelmed by the burden he’s carrying. But it is also a clamorous call for each one of us. Dear Human Being, you keep looking around for help. Look inside you instead, you’ll find everything you need to heal yourself. Strike a balance between your body that is experiencing an earthly life and your soul that, free from the issue of space and time, knows and feels it is the Daughter of God, the Creative Force.

If you need help through this journey, don’t panic! English rock is here to give you a boost!