Stefano Bollani studied classical piano at the Conservatorio Luigi Cherubini of Florence, graduating in 1993 under the strict supervision of Maestro Antonio Caggiula (from the Neapolitan school of Tito Aprea and Luigi Denza). During the years of his classical studies, at home young Bollani also devoured all kinds of music genres, delving into pop music, the Italian Songbook and, in particular, into jazz. He in fact soon became an internationally established jazz musician. It was only years later that he joyously made his way inside symphony orchestras such as the Teatro alla Scala Orchestra in Milan, the Orchestre National de Paris, the Royal Concertgebouw Orchestra in Amsterdam, the Santa Cecilia Orchestra in Rome, taken by the hand by enthusiastic directors such as Riccardo Chailly, Daniel Harding, Kristjan Järvi, Gianandrea Noseda, Antonio Pappano and Zubin Mehta. In 2010 and 2011 respectively, Bollani recorded the blockbuster album Rhapsody in Blue also comprising Gershwin’s Concert in F, Catfish Row and Rialto Ripples, and Sounds of the 30s containing works by Ravel, Stravinsky, Weill and De Sabata, both with the Leipzig Gewandhaus Orchestra directed by Riccardo Chailly and released by Decca. Bollani’s present concert repertoire consists of Mozart’s Concerto No. 23 in A major (K488), Gershwin’s Rhapsody in Blue, and Poulenc’s Concerto in d minor (FP61) for two pianos and orchestra (with pianist friend Hyung-ki Joo), that is, besides his own orchestral works Concerto Azzurro and Concerto Verde. For not only did he enter the world of classical music as a special soloist, but also as a special composer.

CONCERTO AZZURRO for piano and orchestra (2017)

Azure! Like the fifth chakra related to hearing. The azure says: “Listen to yourself and to the other!” But also: “Create! Disobey!” The azure never keeps silent. It continuously reminds us that “there is a key to every door” (Robert Musil), and that “every door is an opportunity, and not an obstacle” (Charlie Chaplin), but also: “let it suffice you, azure is a colour” (Julius Caesar). Stefano Bollani’s Concerto Azzurro [Azure Concerto] for piano and orchestra (2017), brilliantly arranged by Paolo Silvestri (arranger of Bollani’s Concertone from 2003), was commissioned and in 2017 Germany-premiered by MDR Leipzig Radio Symphony Orchestra under the direction of Kristjan Järvi. This work of classical composing is clearly informed by jazz idioms, and that accounts for the groovy, driving playing of young Italian drummer Bernardo Guerra (a great talent from Bollani’s jazz quartet Napoli Trip) among the orchestra members. Concerto Azzurro, structured in a prologue and three distinct movements, perfectly reflects playful Bollani’s ideal approach to classical music making and interpreting: creatively disobeying the rules that demand that a pianist performing with an orchestra shall stick to the rigorously immutable score – achieved by a considerable amount of Bollani’s piano improvising. The idea of the project was wonderfully put in a nutshell by Charlie Brown’s friend Lucy Van Pelt: “I have thought about it a lot recently and have convinced myself that making the sky azure was a good idea!” Concerto Azzurro was performed and recorded at the Centro Cultural Kirchner in Buenos Aires in June 2018 with the Sin Fin Orchestra under the direction of Exequiel Mantega and will be released on Bollani’s label Alobar in February 2021, together with Bollani’s latest orchestral work Concerto Verde.

After Concerto Azzurro for piano and orchestra dedicated to the throat chakra of expression, Stefano Bollani has created a new concerto of classical composing: Concerto Verde [Green Concerto] for piano and chamber orchestra; green like the central heart chakra of love. While Concerto Azzurro was arranged by composer-conductor Paolo Silvestri, with Concerto Verde – and for the first time – it is Bollani himself to have orchestrated the entire work, which also favours moments that disobey the rules that demand that a pianist shall stick to the rigorously immutable score. Concerto Verde, strongly influenced by Bollani’s genius of jazz, allows various passages of improvisation, entrusted to a real piano jazz trio featuring young Florentine drummer Bernardo Guerra (who has also been Bollani’s ally in the Napoli Trip quartet and Concerto Azzurro). It is also informed by tango and other folkloric music traditions of Argentina, and is structured in four movements of distinct character of both melody and rhythm. As tradition wants, the third movement, the ‘scherzo’, stands out by virtue of its joyous playfulness, which reflects Bollani’s sparkling creativity best. With Concerto Verde Bollani has created a hymn to love: to love as such, but also to his love for music. The work was performed and recorded at the Coliseo Theatre in Buenos Aires in June 2019 with the Sin Fin Orchestra under the direction of Exequiel Mantega and will be released on Alobar in February 2021, together with Concerto Azzurro. 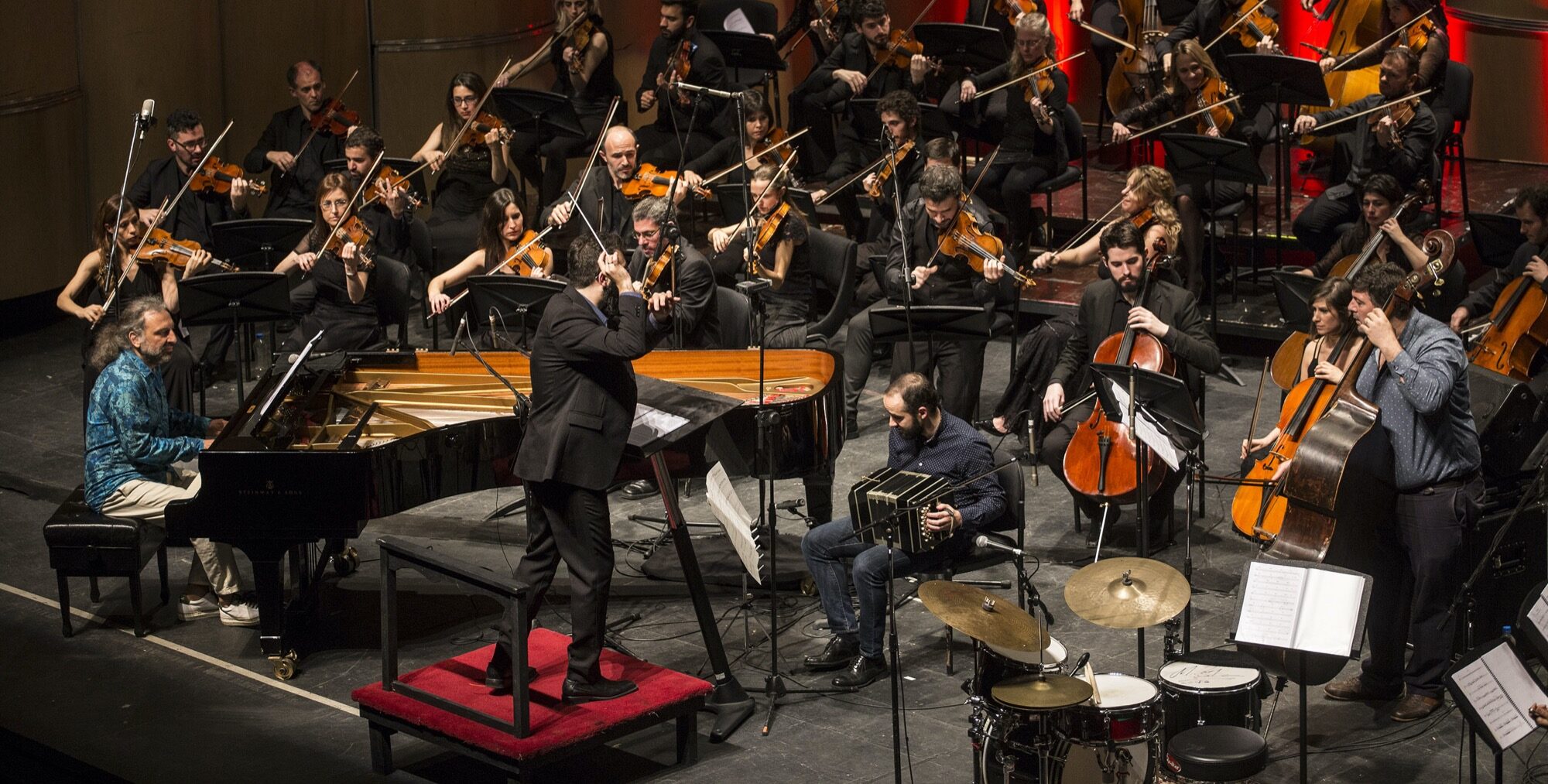