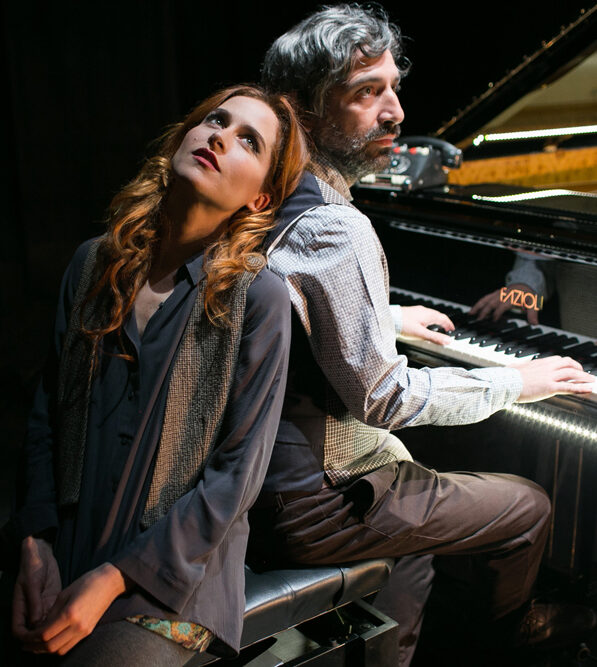 Stefano is on stage with his partner Valentina Cenni performing the story of a heretic and Dadaist Queen who has decided to escape from her kingdom and the role that society has imposed on her. Hiding in the house of her quiet and solitary music Maestro, she is bursting with vibrant energy, her mind bubbling with thoughts about her future. She is filling the air with winged words, while Maestro’s answers are unspoken, expressed only through the piano. In the background, the thoughts and books of phantomatic writer Alain Gosmaux, and the ideal world he uses as an example of a well-organized society: the civilization of the Tuponi people, who are intelligent, knowledgeable, open-minded. But will the world out there – which is not in the hands of the Tuponis, but of more prosaic human beings – let the Queen and the Maestro be?

That appears to be the key question. But there is actually another one: can we ourselves set the rules that govern our lives and openly show our intentions, ridding ourselves of all conventions, including those on life and death? Stefano and Valentina tried to do so between 2014 and 2016. Together they wrote, produced, and performed a play on tour in Italy, drawing a parallel world, such stuff as beautiful dreams are made on; dreams in which apparently unsolvable problems will dissolve in a glass of water to put a smile back on our face. Valentina gives enthusiasm of rebirth to the Queen and turns her into a performer, dancer, philosopher, poet and a singer with every new whirl. She steps into the Queen’s shoes as beauty steps into the shoes of bravura.

Animals stopped talking a long time ago, millennia have now gone by since the days when zebras discussed botany and gnus commented on climate.

Serious matters are not serious.

The only aim of distinguishing between what is serious and what is jocular – as Gosmaux says – is to lock us up in a cage. It makes us roam across this planet as lost wanderers, without the points of reference the Tuponis have firmly held on to.

When entering this life, we come from a different place where there are no distinctions and where everything is evident, limpid, transparent, crystal clear.

Written and interpreted by Valentina Cenni and Stefano Bollani